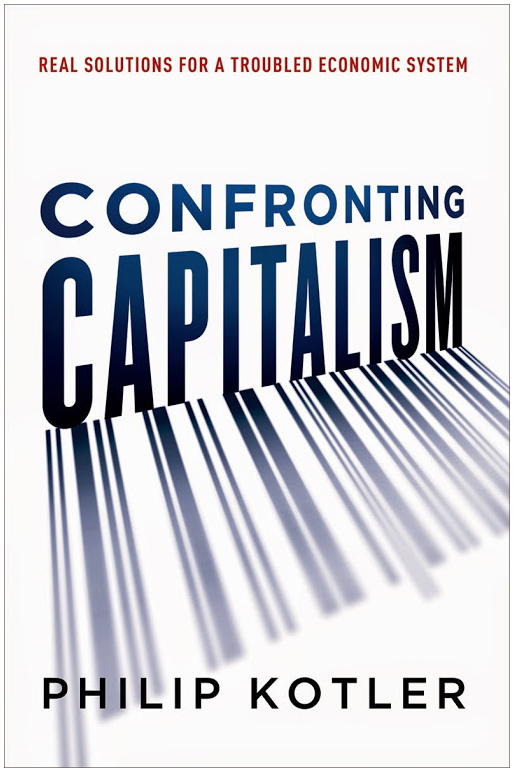 With the fall of the Berlin Wall, one economic model emerged triumphant. Capitalism—spanning a spectrum from laissez faire to authoritarian—shapes the market economies of all the wealthiest and fastest-growing nations.

But trouble is cracking its shiny veneer. In the U.S., Europe, and Japan, economic growth has slowed down. Wealth is concentrated in the hands of a few; natural resources are exploited for short-term profit; and good jobs are hard to find.

Amidst its dire assessment of what’s ailing us, Confronting Capitalism delivers a heartening message: We can turn things around. Movements toward shared prosperity and a higher purpose are reinvigorating companies large and small, while proposals abound on government policies that offer protections without stagnation. Kotler identifies the best ideas, linking private and public initiatives into a force for positive change.

In one dramatic swoop, the Great Recession exposed flaws in the financial industry and the danger of bubbles. But the subsequent fallout has revealed more—structural weaknesses so severe that they threaten our nation’s economic health and the welfare of our democratic society.

The problems are immense: a scarcity of well-paid jobs, underemployment, heavy consumer debt, and a scandalous number of children living in poverty. Multinationals and the megawealthy tuck their money into tax havens, while the rest of us—the middle class, the mom-and-pop businesses, the strivers grasping for a better life—just barely hang on.

What happened to the American Dream?

Capitalism is not working like it used to, concludes Philip Kotler, a renowned business thinker and classically trained economist. Fourteen interlocked forces are undermining our once exceptional market economy, which now struggles to sustain its roles as the engine of growth and prosperity and as a rudder in turbulent times.

Confronting Capitalism delivers a sweeping assessment of the vulnerabilities in our system. Cutting through the noise—the political squabbles, finger pointing, and strident ideologies—it carefully analyzes what’s gone wrong. It synthesizes a vast amount of data, analysis, and ideas, considering opposing arguments and identifying the ones that stand up to scrutiny. And it offers dozens of suggestions for fixing problems and buffering weaknesses.

From the impact of tax loopholes on income inequality to the corrupting influence of corporate lobbyists on politics, refreshingly clear explanations provide both the big picture and the depth and nuance needed to grasp the issues. The book looks at challenges in the global economy, then focuses its lens at home, including:

• How worker well-being has plummeted as the minimum wage fails to meet sustenance levels, while companies rely on taxpayers to shoulder the gap . . . with ideas for how to raise the minimum wage while minimizing job loss and maintaining global competitiveness

• How technology and automation have disrupted industries from music to retail to manufacturing, and threaten the steady demise of more jobs . . . with strategies for expanding opportunities through entrepreneurship, apprenticeship programs, and more training in STEM fields

• How the trough-to-peak business cycle intrinsic to capitalist market economies has triggered 33 recessions in the United States from 1857 to today . . . with proposed policies for cooling down over-heated economies and reducing speculation as well as corporate strategies for moderating turbulence

Every shortcoming—the financialization of the economic system, companies’ short-term growth and profit objectives, insufficient investment in the infrastructure, neglect of the environment, and more—is linked, and each surmountable. Confronting Capitalism maps out the most pressing challenges we face as a nation, and plots a bold new direction for achieving a society that offers a better and fairer chance for all its citizens.